Whether you are in Los Angeles, London or Lae, New Guinea, belly up to any bar where military men and women gather, produce your MPMA Los Angeles challenge coin and watch the free drinks flow! This beautifully engraved coin, 50mm in diameter, features the National MPMA Inc. logo on the front. The back features the iconic Los Angeles City Hall as well as the logos of the two original World War II era Montford Point Marine combat regiments.

It all started in a disease and vermin-ridden swamp adjacent to Camp Lejeune in Jacksonville, North Carolina, Camp Montford Point. Ironically, after President Roosevelt’s Executive Order 8802 led to the enlistment of Blacks into the Marine Corps, the U. S. Navy’s landing and ground combat arm located the basic training facility in the heart of the Jim Crow South. On they came in 1942, from the cotton fields of Texas and the slums of Harlem; African Americans from all walks of life. Many knew the scourge of segregation all too well; for others, their rude greeting to the bigots of the South was a first. Volunteers and conscripts, they would learn to be Marines; and grow up in the process.

They were Montford Point Marines, and their story was unique in the history of the war. While the U. S. Army’s “Buffalo Soldiers” and the Army Air Forces’ “Tuskegee Airmen” are more well known in modern World War II lore, the U. S. Marine Corps mobilized more men to more locations of conflict than the other service branches in the War in the Pacific. They did it with rapid and efficient deployment. The presence of these “Montford Pointers” was a significant factor in the major battles of 1944 and 1945. 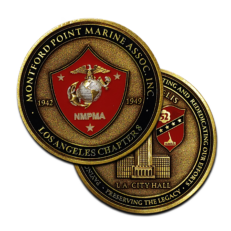