Tells the story of the building and dedication of the Richard D. Winters Leadership monument in Normandy, France in June of 2012. The film focuses on the leader of World War II’s “Band of Brothers” and the leadership skills he possessed. A never before seen interview with the late Major Winters is utilized, as well as interviews with the “Band of Brothers” who are still alive. 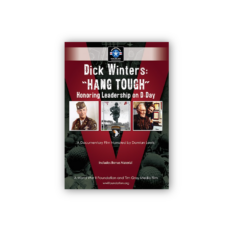