Taking Flight follows Nadine as she became one of 1,102 women to join the Women’s Airforce Service Pilots and one of only 303 WASPs to take to the skies in military cockpits, transporting aircraft to bases across the nation for use in the theaters of war. This book marks her milestones: the first Kansas woman to earn a commercial pilot license; among the earliest women to fly the US Air Mail; one of only 26 WASPs who flew the Lockheed P-38 Lightning, a fighter aircraft—and the first woman to own one; the only woman in the country to instruct male pilots to fly fighter planes after the war. 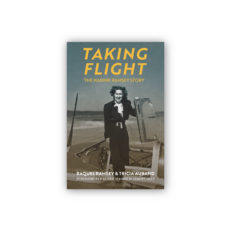