It was just another day in paradise. At 7:55 A.M. all that changed as the first Japanese planes dropped their torpedoes and bombs on a stunned American Pacific fleet. Every sailor, airman, soldier and civilian who was in or near Pearl Harbor on December 7, 1941 has their own individual story of courage, fear, heroics or tragedy. No two stories from that day of infamy are the same. These are some of their stories. They will always Remember Pearl Harbor. 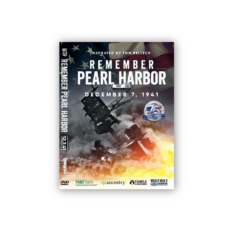