Born To Be Soldiers

Few believed they could do it. During World War II, 350,000 American women joined the Army, Navy, Coast Guard, and Army Air Corps. Some served on the American homefront, while others volunteered to go overseas. While people disapproved – even family, the women persevered and outshone everyone’s expectations. Contains stories of 13 women interviewed by Kayleen Reusser who told their stories about entering the military to support their country. Softcover, 150 pages. 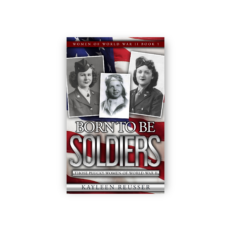