Battling Bastards of Bataan:
This fully-illustrated account details all the major battles, decisions and outcomes as the Japanese military sought to collapse the United States’ principal military enclave in East Asia and seize a country rich in natural and human resources for their Greater East Asia Prosperity Sphere. The planned 50-day campaign took 133 days because they underestimated the grit of their foes. Despite horrendous conditions, lack of air support, food and medicine, sheer grit compelled the Americans and Filipinos not to give up, even if the rest of the world had given up on them.

Never Surrender:
Narrated by Josh Brolin, Filmmaker Steven Barber, Director Matthew Hausle, and Executive Producer Dr. Raquel Ramsey present the true story of Lt. Col. Edwin P. Ramsey, who in 1942 led the last cavalry charge in U.S. army history against the Japanese in the Philippines. Refusing to surrender, Ramsey fled into the jungle, enduring starvation and disease, while leading over 40,000 Filipino guerrillas resisting the Japanese forces for three and a half years. While being hunted relentlessly by the Japanese, he provided vital information to Gen. Douglas MacArthur ensuring his successful return to retake the Philippines. MacArthur personally awarded Ramsey the Silver Star for his gallantry. 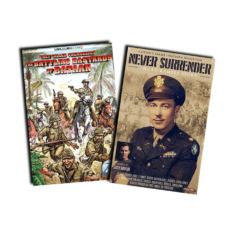 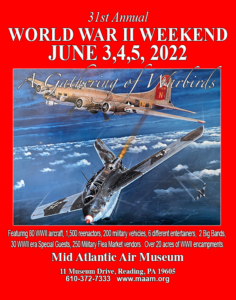 We’ll see you in Reading, PA at the Mid Atlantic Air Museum!