It Was Our War Too: Youth in the Shadows of WWII

Tells the stories of men and women who as young people endured the war and later emigrated to the US to start new lives. Not every story is harrowing– one high school gal worked as a Rosie the Riveter making a Top Secret part which she only was told about years later. Another young girl won a prize for her Victory Garden. You’ll notice the book covers feature photos from people inside the books. Each book is filled with photos, some taken by the vets in the book. They are all large print. 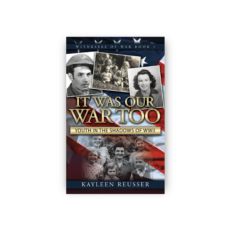