SKU: 048 Category: Hanover Books
The fourth book in the WWII Legacies series has 28 stories of men and women who served in various branches of the American military during WWII.
“My thoughts were like a tornado during the war.”
These words from an American soldier reflect the terror and confusion felt often by men and women serving in the military during World War II.
Stories in this volume include a C-47 crew of the Eighth Air Force flying supplies to Allied troops surrounded by Japanese forces in the Philippines. Will anti-aircraft fire cause them to crash?
Another story is of the recently-liberated killing center of Dachau, Germany. When Allied troops discover ovens used by Nazis to burn thousands of bodies of people gassed to death, one soldier wonders privately how many more grisly sites he will see across Europe.
A Medal of Honor tale of Marine Hershel ‘Woody’ Williams at Iwo Jima describes how he fired his flamethrower at a pillbox filled with the enemy. Will his boot camp training kick in to save him and others from death?
These true stories of men and women from the Army, Navy, Army Air Corps, and Marines who answered America’s call for freedom will encourage respect for American ideals and all she stands for.
Softcover, Format: 8-1/2″ x 11″ 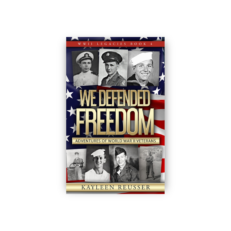