Approximately 16 million Americans served as Allied forces during World War II from 1941-1945. More than seven decades later, only a scattered few of those people remain to tell about their experiences. Kayleen Reusser presents a third volume of poignant tales from interviews she has conducted with 250 World War II veterans around the nation. Memories from men and women raised mostly on humble farms and in small towns bring the war to a personal level. Often lonely, exhausted, hungry, and cold, these soldiers served in places and participated in events few could have imagined growing up. Their bravery and fortitude remained evident as they persevered to win that mighty war that threatened the world. Kayleen Reusser has interviewed military veterans of many eras. She is the wife and mother of Air Force airmen. 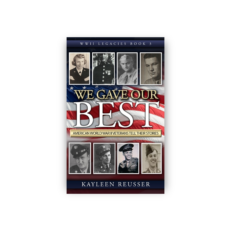